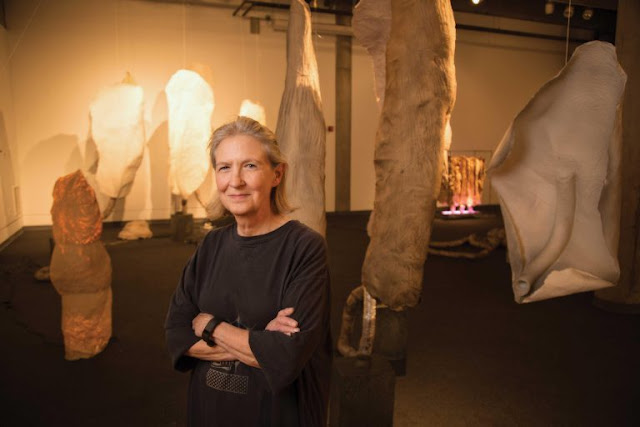 Photography by Beau Gustafson
Sometimes it is impossible to understand just how far ahead of the curve you are, but Sara Garden Armstrong never could have imagined just what it meant in 1979 to purchase the 21st Street Studios building that has been home to artists’ studios and exhibition spaces in Birmingham now for over 30 years. This month, it hosts ‘Echo,’ an exhibition of her drawings, curated by the Alabama School of Fine Arts’ Cumbee Tyndal, which opens the same evening as her ‘Breath & Shadow’ project at ASFA’s Vulcan Materials Gallery.
For Armstrong, both projects prefigure an upcoming return to Birmingham after three decades of living and working in New York, but more importantly, both reflect the possibilities of longstanding connections, friendships, and mutual respect that have always been part of her experiences here.
“‘Breath & Shadow’ isn’t really a retrospective,” she says. “It stems from a project I’ve been working on after having been selected for Space One Eleven’s 2015/2016 Creating a Living Legacy Program that was developed and funded by the Joan Mitchell Foundation which allows living artists to catalogue and archive their works. Two years ago, Cumbee invited me to do a project here, and between that invitation and an examination of what’s been revealed through the Joan Mitchell Foundation project, I’ve discovered new ways to look at many of the pieces I’ve been making over the years.”
Armstrong is nothing if not prolific. Her pieces range from two-dimensional works that map the ways that sound moves through space—“those are my ‘Landscape Marking’ drawings,” she explains—to a series of pieces that combine almost-identifiable natural elements with whispering, wheezing, seemingly alive mechanical elements that could bring her works into being at any moment.
“The title of the ASFA exhibition is ‘Breath & Shadow’ because all of my work is somehow about abstracted experiences of time and duration, coupled with an understanding that these pieces will have the potential to have shifting meanings.
“Sometimes,” she pauses, “I even surprise myself, like I did when I built a discrete work. When I made ‘Skin Rack’ it was a big shock. But here, it has the capacity to be part of a dialogue that has not existed before.”
Armstrong’s art is always about the unusual combination of subject matter and materials. “I am really process oriented, so I make a lot of work,” she says. “Often the concept comes to me as I go along, and that is how I understand it. When I made ‘Breeder’ and combined the acrylic box, the tubes, and the other elements, it just came together as a great combination of the natural and the mechanical.”
Part of the reason for this quiet approach can be attributed to Armstrong’s Southern roots, even given her three decades in New York. “I think often that Southerners are really subtle and layered,” she observes. “My work doesn’t really deal with the body through nudity, for example. It’s all about focusing on the body, but it isn’t that direct.”
What has resulted is a body of works that eschew bold, bright colors for more neutral, simple colors. The complexity of the pieces is not tied to their palette; instead, it stems from each piece’s internal consistency or tension. The drawings create relationships within and between each other, as do the works that suggest leaf forms, or that repeat elements formed from mundane rectangle blowers made of formed galvanized sheet-metal ductwork. There, what makes them even more discomfiting is their raspy, breathy roar, something that recalls Frank Booth from “Blue Velvet” as much as anything else.
Whatever the connections, and whatever the feelings, Sara Garden Armstrong brings her own unique brand of complexity back to Birmingham, cementing three decades of quiet contributions to a city that may not even know her name. Her building has housed artists for decades; her innovation has been inspiring creatives for just as long; and now her work, ushering in her return to the city, may challenge, confound, or excite. Whatever the case, and wherever it is seen—whether at ASFA, being shared with and engaging students, or in a gallery space creating new places to explore, Sara Garden Armstrong is back: maybe not with a vengeance, because that really isn’t her style, but with a wry smile. We’ll leave it at that.•
Posted by SGA at 12:37 PM No comments: 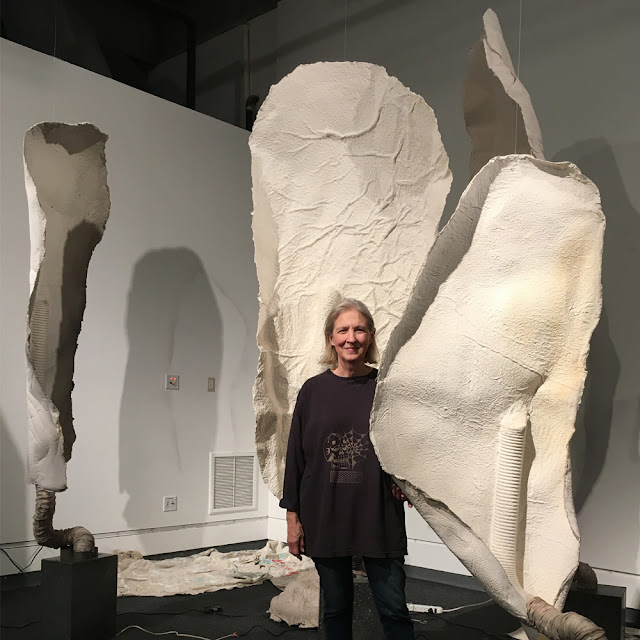 “Put yourself in positions where you feel lost. It gives you incredible energy to face and solve problems. Connect with your fellow artists. Your community is what really helps you survive.”

1. You lived more than 30 years in the sprawling, expensive artists’ Mecca of New York City. How did you survive and thrive in that potentially-overwhelming environment?
Before I moved, I’d been teaching at UAB. I’d tell my students, “You have to be creative. You have to approach things in a different way.” When I arrived in New York, I realized I’d have to take my own medicine. (Laughs) I had no plan. I had to create my own path. I knew I didn’t want side jobs that would interfere with the pursuit of my art making. I tried selling Canon copiers. I was not a salesman. I tried many different things and had a good time doing them. I found a good gig as a tour guide. That fit me and my schedule. I’m an artist. Artists survive.
2. You seem to really embrace the entrepreneurial side of being an artist. Has that always been the case?
Yes. One of things I did early on was to buy a piece of real estate. I sold “art futures” to pay for the renovation. Basically, I received funding from my investors either for art to be produced in the future or as a loan, including interest payments, with my art work as security for the loan. In fact, I had some great people in Birmingham who were part of my “art futures” venture. For me, it’s been important to continually sharpen my skills. There’s a New York organization, Creative Capital, with really valuable career services for artists. Beyond the content they offer, I’ve gained so much from the people I’ve met when attending their programs, especially when there’s a mix of people coming from different artistic disciplines. For artists, it’s so important to be a constant student.
3. Your desire to be a life-long learner is a really admirable quality. Balance that out for us with your fatal flaw.
I’m a little obsessive. (Laughs) I had a reputation, even in New York, for working a lot, a lot. It takes it. I’m continually refining and struggling over my work. When is a piece complete? When is more detail needed? How do you objectively step back and really see your work critically? It’s all about seeing. And it’s not just the work itself. I obsess over spaces. They’re such wonderful challenges. They give me information. And I don’t have tight control over someone else’s installation space, so, once the art has entered the room, I react all over again. I always feel like my art moves or changes once it enters an exhibition space, and I have to be flexible and willing to make further adjustments. So much of art is about the coming together of the work, the space and the participants in the experience.
4. What advice would you give to Birmingham’s younger artists?
Don’t play it too safe. Go different places, explore different cultures. Put yourself in positions where you feel lost. It gives you incredible energy to face and solve problems. Connect with your fellow artists. Your community is what really helps you survive. Or, at least, that has always been the case for me. Set aside time with the team you make for yourself to brainstorm, provide constructive feedback, co-think. Be patient with yourself – building a career as an artist takes time and effort. I hope, now that I’m permanently back home, that Birmingham’s growing population of young artists will include me in their conversations. I want to be part of a community where all ages and cultures are working together, and I hope I can make a contribution. Most importantly, I’d tell young artists, “Do what you want to do.” I pretty much did that.