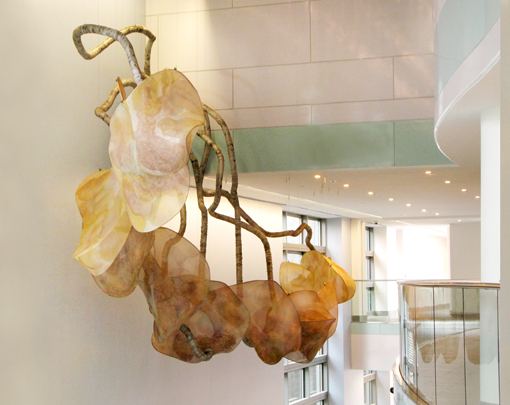 Decem Aspirare (Ten to Breathe) is a site-specific sculpture that breathes.  The artwork was commissioned by United Therapeutics Corporation for the atrium of its new building in Silver Spring, Maryland.  It is based on the bronchi, the organs that feed air into the lungs, and the lungs themselves. These anatomical elements have been transformed into a self-sustaining organic breathing system much like that which maintains the human and animal populations of the earth.  The resulting sculpture is a biomorphic construction, which appears to exist independently as a living organism.

The following is an interview by art historian Steffany Martz.


Martz:  How did the commission come about?


Armstrong: United Therapeutics Corporation (UTC) is a biotechnology company focused on the development and commercialization of unique products to address the unmet medical needs of patients with chronic and life-threatening conditions.  It began as a company to develop a drug to treat pulmonary arterial hypertension (PAH), a rare and fatal disease that is caused when the artery between the heart and lungs is damaged.  When UTC decided to build a new building, Creative Director Bill Rock felt this progressive and innovative biotech company should have an atrium sculpture that related to its history and future. 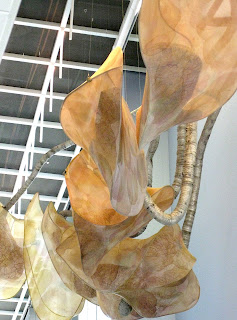 
Armstrong:The sculpture is made of ten forms consisting of translucent fabric stretched over stainless steel tubing.  The fabric has been painted and dyed with very thin layers of acrylic paint.  Eight of the forms have visible interior breathing bags connected to hoses that rhythmically transfer air to and from concealed blowers.  The blowers are timed so that the forms continually change breathing patterns in relation to one another.  Because the lines of tubing and hose can be seen through the overlays of translucent fabric, the sculpture is also, in effect, a drawing that traces the movement of the breath through the space.


Martz:  Is this your first breathing sculpture?


Armstrong:   I created my first breathing sculpture in 1982 for “The Sound Corridor,” a group exhibition at PS1 in New York City.  The idea came from a drawing.  I translated the lines and points on paper into copper pipes connected to hoses.  The hoses were connected to a blower unit installed behind a sheetrock wall.  Air moved through the copper tubes onto the viewer.  The airflow was the sound, and the hoses and blower became a breathing unit. This work was the first in my Airplayer series, multi-media installations created between 1982 and 1992.  The movement of air as the major component of human sustenance and life support has carried forward in my artwork. Starting in the early 1990s the breathing works became individual pieces.  Decem Aspirare, however, is a site-specific installation. 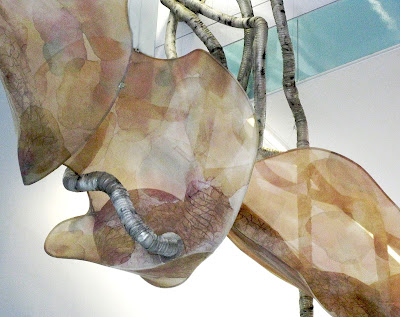 Martz:  Please talk about your process for Decem Aspirare.


Armstrong:  The primary requirements for the sculpture were quite specific.  It had to be large enough to hold the space and it had to deal with the bronchi.    I began by working with the biological shapes of these organs in order to arrive at the abstract forms that would carry the breath.  I also decided on a translucent fabric for the forms’ outer skin so that an interior breathing shape would be visible.  And, I calculated that ten forms would be needed to create the required mass.  The atrium is a very long, narrow space with curved walls and multiple levels. The exterior wall and two entrances are predominantly glass.  I made preliminary decisions keeping the physical properties of the space in mind.  I was also concerned that the forms connect harmoniously as they move through the space, becoming a dynamic element of the space.  I then built a model.  Building a model helped me grasp the boundaries of the space and the physical placement of the forms within the space.  It also allowed me to mark the distant views and perspectives of the atrium space while in my studio.  The final form of the sculpture could not be determined until installation, because the routing of the hoses could only be done on site after the forms were suspended.  The ceiling could then be factored in as a constraint. 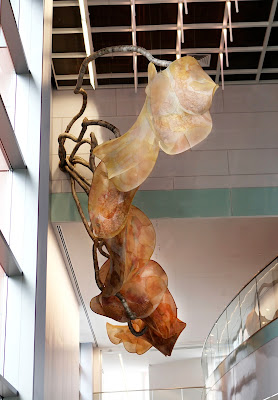 Martz:  What about color?


Armstrong:  I had a revelation one day on the subway returning home to Queens.  I started looking at my fellow passengers.  Everyone had a distinctly different appearance (Queens has more diversity than any other area in the US – each day one hundred fifty languages are spoken here).  I then looked at my own hands and took a photo.  That was it – the abstract pattern formed by these moving hands of many colors gave me the idea for the colors of the outer fabric skins.  Very quickly I photographed the hands of the great team working on the sculpture – an art major from Taiwan, a design consultant from Hong Kong, a seamstress from Ecuador, an engineer from Queens and a Peruvian restaurateur who generously offered temporary gallery space for the sculpture.  The resulting photos provided the basis for the colors used.


Martz:  Were there any special issues for this artwork?


Armstrong:  A major issue was that all materials had to be fireproof and able to stand the stress of breathing between twelve to twenty-four hours a day.  The hardware for hanging the sculpture and the connections between the hose, the interior bag and the form were also issues.  All had to be light, delicate and very secure.  Next, how were these industrial materials going to be treated to suggest an organic mystery?  This sculpture needed to appear alive.  I modified a white translucent stretch fabric by a process of dying and painting the fabric multiple times.  The interior breathing bags were painted with sponges to look like cellular composites with veins running through them.

The breathing system directly references the bronchi and lungs, and by extension other organic systems such as the ocean whose waves continuously saturate the sand and then recede.   The hoses became the lines of a drawing in space.  They have small support tubes in the covering providing a linear structure for the sculpture.  They are the connectors, the feeders, the roots, the blood system and the umbilical support for the breathing forms.  These organic systems, always in flux, are the life around us – from the micro to the macro.


Steffany Martz holds a Masters of Philosophy from the Graduate Center of the City University of New York where she is a P.H.D. candidate in Art History.  Her B.A. in English is from Vassar College.  She is also a graduate of the Christie’s New York Art Course.  Before opening her contemporary  gallery in Soho in 1995, Martz worked as a news writer, for NBC, ABC, and the BBC  in London. In 1997, she moved her gallery to Chelsea, where it thrived for three successful years. Presently she is consulting on numerous art projects.

Artist on the City - B Metro Magazine 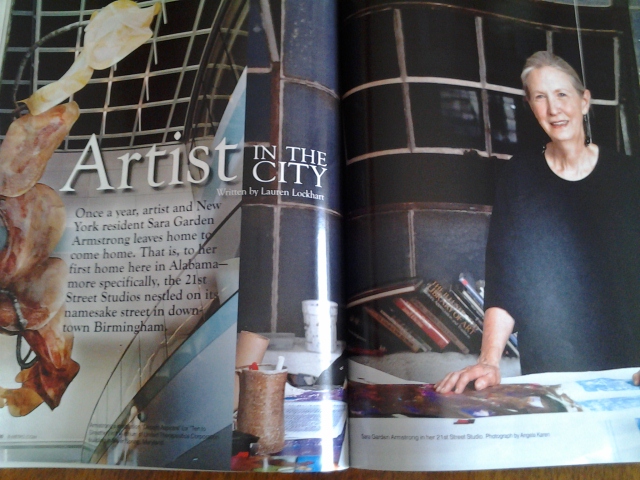 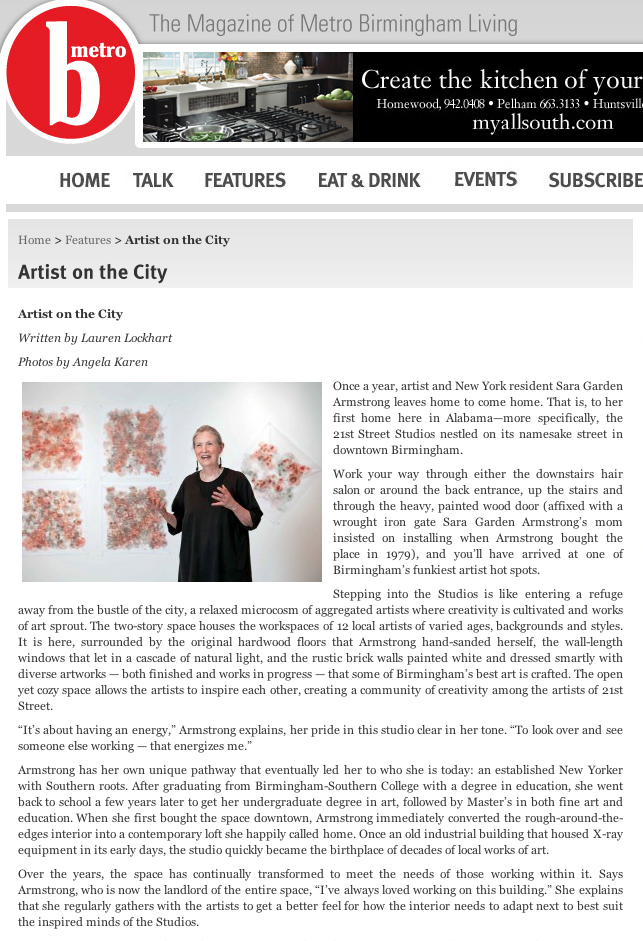 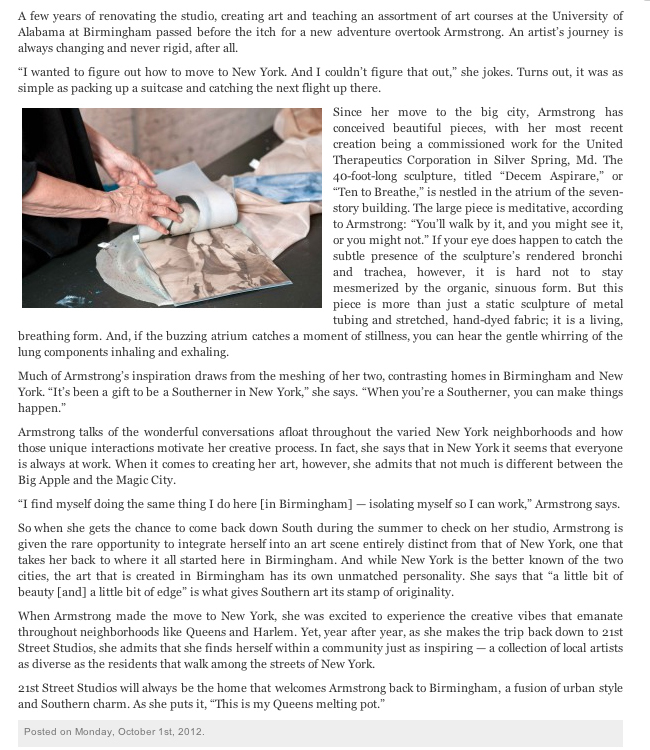