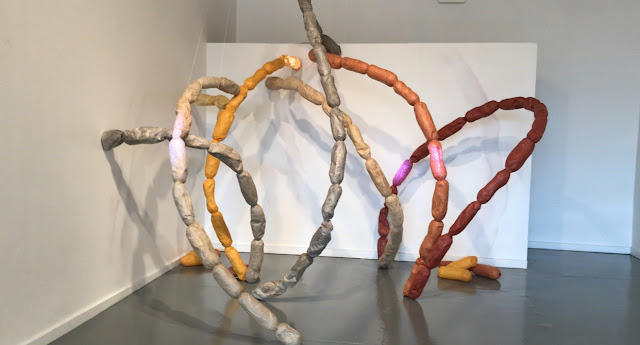 Marking Landscape 3, 2018
Size:   9’ h x 11’ w x 10 ’
Materials:   Forms are sprayed with abaca fiber.
Interior light-emitting diodes (LEDs) are controlled by a micro-controller.
The LED runs are programmed with parameters (variable) speeds and numbers of LEDs so it will never be the same each time.
There are eight linear runs varying in size from 17 1/2 feet to 3 1/2 feet.

This site specific landscape is about growth, change, meditation and the never ending shifts of realities that constantly confront us. The forms and color address linear movement with the LEDs moving through space referencing time, sound, and energy.

The work acts as calligraphy marks throughout the space using transparency, mapping and layering. The LED runs have the same color light yet appear very different because of the length of the runs and the color changes of the forms – referencing our diversity and alikeness. Some shadows are cast on the walls while others are painted - layering another conversation of what is ‘real’ and not real.

Marking Landscape 3, 2018 is an exploration from two previous works using LEDs and my most recent paintings, Murmuring Landscapes series.
Sentient Matrix, 2014: Commissioned by the National Multiple Sclerosis Society, Alabama-Mississippi. An abstraction of the brain where the linear forms symbolize neutrons. A blockage with MS in the brain is referenced when the LEDs turn red and stop.
Marking Landscape 2, 2017: The LEDs reference sound movement. An image was taken from a wall of sound drawings and translated into three-dimensional drawing of sound moving through space.
Murmuring Landscapes series, 2018: The paintings use pigmented fiber on canvas as paint.